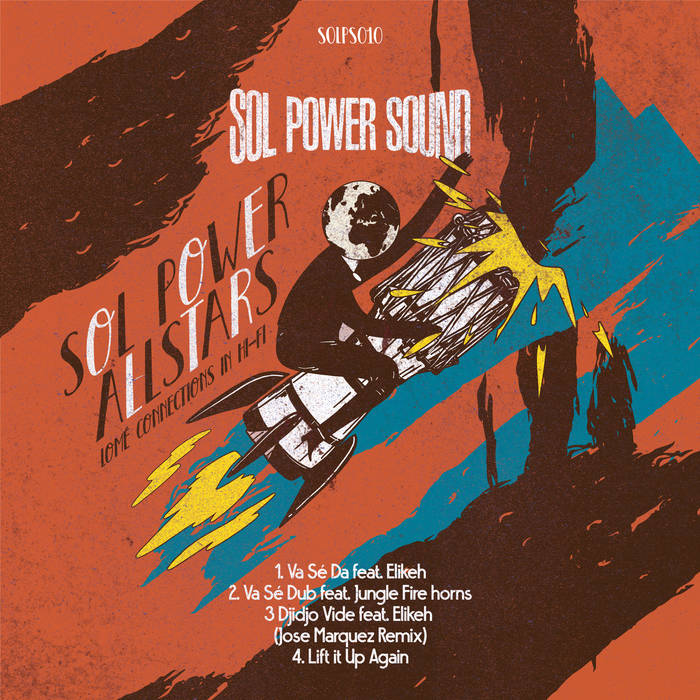 During a year like we've never seen before, the Sol Power Sound imprint reaches the proud milestone of its tenth release, Lomé Connections in Hi-Fi by the Sol Power All-Stars, because the music simply can't stop now.

To anchor the EP, the Sol Power All-Stars revisit some touchstones that have been featured on previous releases. Massama Dogo, of DC based band Elikeh, connects the capitol cities of Togo and the United States with "Va Sé Da", much as he did on the Sol Power All-Stars’ Djidjo Vide EP from 2016. Elikeh guitarist Frank Martins (who got his start with legendary 1970s Nigerian psych rock bands) propels the slinky afro groove while the LA-based Jungle Fire lends its infamous horn section to give the hook its punch.

The "Va Sé Dub" increases the slap factor as well as dancefloor tension, letting darker synths fill in the stripped down space as the Jungle Fire horns take center stage and stretch the jam all the way out.

The Jose Marquez mix of "Djidjo Vide" was previously only seen in digital form in 2016. This sturdy and deep take was just waiting in the wings to serve as the hidden muscle in the B1 slot of a physical release.

"Lift It Up Again" is a treat for adventurous selectors that closes the project. It carries the same DNA of the other tunes but pushes the vibe further left with dubbed out carribean samples, tripped out synths, and broken drum patterns.

Bandcamp Daily  your guide to the world of Bandcamp

Featured sounds from Fly Lo and Ahmed Idris, plus Mother Nature hops on to drop off new project